This was probably my favorite day of our Disney World vacation. We started in Tomorrowland. We had a FastPass for Buzz Lightyear’s Spin, but we didn’t use it because the line was not long at all. I think it got longer later in the day. The Tomorrowland Speedway was lots of fun. I just kept laughing because Abby was bumping along back and forth and I just kept thinking how scary it will be when she turns 16! Abby and Cade got to meet Stitch. He was very funny. He pretended to pick his nose with Cade’s marker, which Cade thought was hilarious. After we made our way through Tomorrowland, we made our way into Fantasyland. We took a quick ride on Dumbo and then we utilized the Rider Switch again on Splash Mountain in Frontierland. Derek and the kids got in line for Splash Mountain while Cara and I headed back to “it’s a small world.” We rode that twice and then met Derek, Abby, and Cade in line at Be Our Guest for a quick service lunch. Be Our Guest had a neat electronic way of ordering on the way in. The dining room at Be Our Guest was beautiful and the drink machines were accessible. I had the carved turkey sandwich which was very good. After lunch, we went to use a FastPass at Enchanted Tales with Belle. That was a fantastic experience. The kids really enjoyed it and I had fun watching.

We spent the afternoon meeting characters, riding rides, and having fun. Around 4:00, we left the park and rode around on the monorail to have some rest time and to look around. Then we went to Contemporary Resort to eat at Chef Mickey’s. Chef Mickey’s was a lot of fun. The food on the buffet was great and the characters were fun too. After dinner, we went back into Magic Kingdom. We were still hanging around in the front when we realized it was almost time for the Main Street Electrical Parade to begin. We got seats right in the front where the floats come out. It was a lot of fun and I got some glow things out of the bag for the kids that I had brought with. I had glow necklaces, bracelets, rings, and swords. It sure was a lot cheaper than buying the souvenirs they were selling.  After the parade, we met some fairies and rode some more rides. It was an amazing day…and night!

It took me a few days of trial and error, but I finally found the answer of how to utilize snack credits! As soon as we got to Magic Kingdom, we made our way to the back of the park to the new Fantasyland area and went to Gaston’s Tavern for breakfast. I went in to order while Derek and the kids snagged a table outside by the fountain. I ordered 2 LeFou’s Brew in a regular cup, fresh fruit, and a warm cinnamon roll. The menu price of the LeFou’s Brew was $4.49, but I used snack credits for those and the price of the cinnamon roll was $3.99, which I also used a snack credit for. The drink is a frozen apple juice slushy with a fruity foam on top. It was a pretty big cup and if I had it to do over, I would have ordered just one. Because it was icy, it lasted through all 5 of us for breakfast. Even though the cinnamon roll was big, I would have ordered two. It was so good. We all devoured it. It was warm and gooey and yummy! 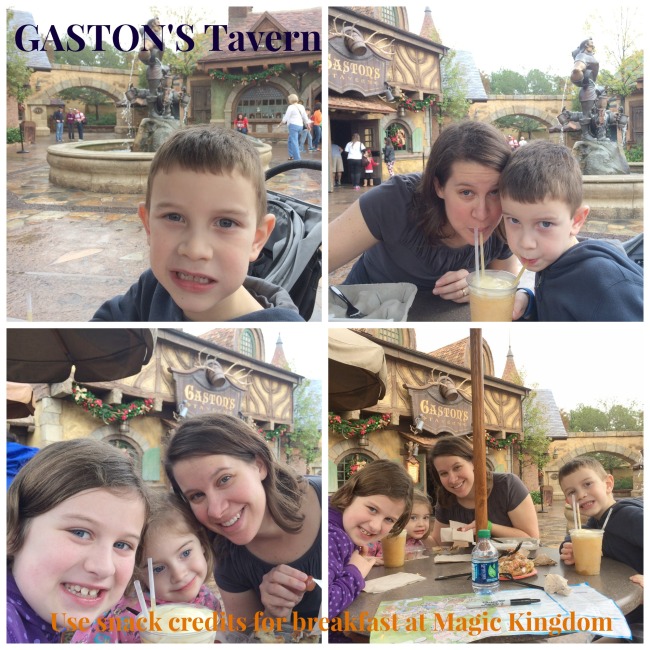 While we ate, we looked at the Magic Kingdom map and came up with our plan of attack. The kids enjoyed the breakfast and eating outside by the fountain was nice.

Magic Kingdom is the quintessential Disney World park. Walking through the gates, walking down Main Street, and seeing Cinderella’s Castle is amazing. After having breakfast at Gaston’s Tavern in the new Fantasyland, we spent the morning riding rides. We love it’s a small world, Peter Pan’s Flight, Pirate’s of the Caribbean, and Splash Mountain. We ate lunch at Pecos Bill Tall Tale Inn and Cafe. It was crazy busy and hard to find a table but the food was good. The kids had hamburgers, Derek had a southwest chicken salad, and I had the pulled pork. The rain was awful for parts of the day. We had our emergency ponchos, but it didn’t make much difference. We were all soaked. We did have moments of reprieve from the rain, but our shoes were soaked through for much of the day.

We ran into one of Abby’s classmates and his family right by Aloha Isle while we were in line for a Dole Whip. We visited with them for awhile and then went off to use our fast passes in the afternoon. We used our fast passes on Pirates of the Caribbean and Peter Pan’s Flight. Those were good choices because the lines were very long. After that, we went to Cinderella’s Royal Table for dinner. We met Cinderella and took pictures in the lobby of the restaurant and when they called our name, we went upstairs to the dining room. Our table was right by the window overlooking Prince Charming Royal Carrousel. It was raining hard and it was windy outside, which made us extra glad to be sitting in the castle. Dinner was good, the service was good, and the atmosphere was amazing! The kids had fun meeting the princesses and making a wish with the wishing star. While Ariel was at our table, Jasmine came into the dining room. Cara saw “Jazz Man” and took off across the dining room toward Jasmine, leaving poor Ariel in her dust. It was pretty funny except I had to run through the dining room after her. After dinner, we went to use our last fast pass on the new ride, Under the Sea~Journey of the Little Mermaid. It was a nice ride, but not quite as good as I was expecting. It was the only time we rode that one. We rode a few more rides on our way out and then decided it was time to call it a night. Other than the rain, it was a great day in the Magic Kingdom. We made it back to the hotel and attempted to dry out and get warm.

Friday morning we rented a little two seater speed boat and took turns going out. Derek and Abby went first and then Derek took Cade. I found out later from Abby that “The lady told Daddy to slow down.” The lady would be lake patrol! haha David, Maddy, Jonah, Grace, Mom and Dad took turns too. We swam and relaxed by the pool and then had a light lunch before heading over to the Magic Kingdom for our last day at Disney World. Derek, the kids, and I met Mom and Dad at Liberty Tree Tavern for a late lunch. The food was very good. After lunch, Mom and Dad went on their own and we headed off to do some souvenir shopping, riding, and character meeting. Abby and I stood in line forever to meet the fairies, but Abby loved it. Silvermist, Tinkerbell, and Rosetta were there. We rode lots of rides after that and had some cold drinks, including one that had orange sherbet with pineapple juice. It was tasty! I made the kids ride Pirates of the Caribbean probably 4 times. It is my favorite. We stayed just long enough that we got stuck in a gift shop, blocked by the parade and made our way to the boat right after the parade finished. We got to watch the fireworks from the boat. It was the perfect ending to the night.

Another early day…at least for Abby, Grace, Beth and me. We took the girls by bus to Magic Kingdom for what we thought was a 7:50 Bibbidi Bobbidi Boutique appointment. We got there about 7:30 and it was already super hot. Abby was tired and cranky and I wasn’t doing much better. We stood in line and waited. It was 7:50 and they still hadn’t let us in. Beth asked and they still didn’t let us in. By the time it was time to go in, Abby was crying and said she wasn’t going to have her appointment. I didn’t push it and we made it to the castle where the Boutique was at. It wasn’t even open. It opened just after 8, so apparently we weren’t late. Anyway, Abby looked at some pictures in a brochure and then decided that she would do hair and make-up, but not nails. That was fine with me since she had cute Mickey Mouse and polka dot nails from Downstairs on 1st before we left. She ended up with the wild pink hair Pop Star look. It was great. Abby and Grace really had a great time.

After the Boutique, we met everyone at Tony’s Town Square for a Grand Gathering Character Breakfast. Mickey, Minnie, Goofy, and Donald were there. Cade was starting to warm up to the idea of characters and actually got close enough for a few pictures (while clinging to me for dear life!). Breakfast was good, as usual, and afterward we explored the Magic Kingdom! We spent most of the time in Fantasyland. We stayed together as a group of 11, which was fun. We left early afternoon and went back to the hotel to swim and rest. After dinner, we went back to Magic Kingdom with Mom and stayed for the Electric Parade and the fireworks.