Wow! What an awesome, busy day in New York City. I thought going in that I would like the city, but I figured once I saw I’d feel like I would never need to see it again…wrong. It is amazing and I already want to go back (when the kids are a little older). We took the train from the North Elizabeth Station and got out at New York’s Penn Station by mid morning. We took the subway up to Times Square and made our way to street level. The lights were amazing even during the day and that is one reason I want to go back. I want to see it all at night. We walked around and looked like tourists, which obviously we were, with our necks craned up to see everything. It was a slightly overcast, but very bright. It was hard to open our eyes for pictures. 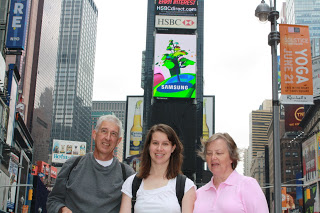 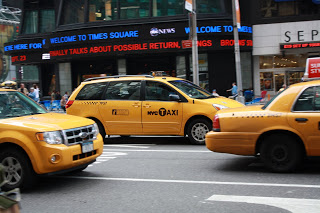 We walked around Times Square and went into the Hershey Candy store and then we walked a few blocks to the Rockefeller Center. We went to the Top of the Rock. The elevator on the way up was pretty cool. The ceiling was glass and it showed little movie clips of the Rockefeller Center and we could see the lights from the elevator shaft as we flew to the top. We got out and looked around. There was an amazing view of Central Park, the Empire State Building, and the whole city. When we came out, we saw a McDonald’s sign a few blocks away. So, we walked down there and had some lunch. We then made our way to a subway station and came out about a block from Central Park. 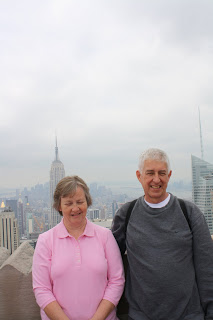 There were horse carriages all lined up along the street. We went to the first one and told him we wanted a ride. He could only take 3 adults and the kids. Dad gladly sat out and kept the strollers for us. Mom, Derek, Abby, Cade and I piled in, took some pictures and we were on our way. It was such a relaxing, fun time. We rode past the sights of the lower, east side of Central Park, including a park, the carousel, and the zoo. It was so relaxing, in fact, that Cade fell asleep less than 5 minutes into the ride. Our horse Billy, and the driver led us through the park and we made a circle back to where we started. We found Dad relaxing on a bench in the shade and we got Cade transferred to a stroller. Then we made the same route walking. Instead of playing at the park, Abby decided to climb on the large rocks with Derek. Cade started waking up just in time for the carousel ride. He and Abby were so cute waiting for the ride together. She was hugging him and telling him what they were doing. It was a very fast carousel and difficult to get a picture of them on it, even with the new camera. We finished the walk around the park and looked for FAO Schwarz toy store.

In Abby’s defense, she has an amazing sense of smell, which I used to have up until last October, so she held her nose for most of the ride because of the smelly horse. Notice Cade awake and then Cade sleeping. 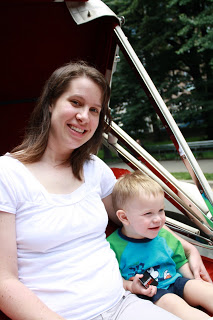 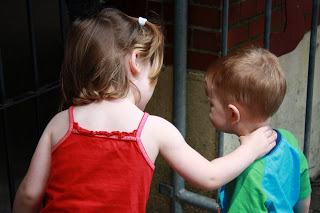 FAO Schwarz was pretty amazing. It was fun just to look at the different toys and to see the giant Legos guys, like Batman and Chewbacca. Abby took a long time to choose a toy that she wanted. Most of the things she went for (fancy dolls) cost almost $100. I told her to keep looking. She almost got a stuffed Spot dog, from the books, but she lost interest in it before we were even ready to check out. Derek, Abby, and Cade played on the “Big” big piano. In the movie, Big, Tom Hanks plays on the same piano. In the end, Abby chose a little pink blanket baby and Cade got a little boy stuffed doll dressed in an elephant costume. They were both happy. So was I because we got both for less than $25. 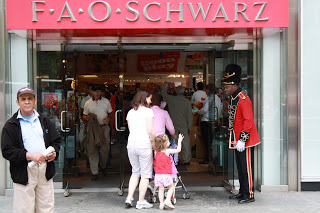 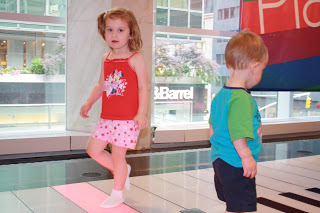 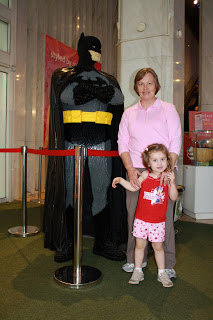 After a long, wonderful day in NYC, we got back on the subway, then on the train and made it back to the North Elizabeth station. We ordered Perkins again for supper and Abby, Derek and Cade swam. We played more cards after the kids were sleeping and it was the perfect ending to a perfect day.