On January 3, 2014, we went to Hollywood Studios. We started with the Beauty and the Beast Live on Stage musical. It was pretty chilly but as soon as the characters came on stage, we forgot about how cold we were and really enjoyed the show. After the show, we walked over to Hollywood and Vine to check in for lunch. There was a buffet lunch, characters, and dancing. The kids enjoyed meeting Jake, Oso, June, and Handy Manny. Of all the places we ate, this is the place that surprised me the most. Last time we went in June 2010, we went to Hollywood and Vine for breakfast so we hadn’t had the lunch before. It was delicious. After lunch we walked around Echo Lake and toward Streets of America. We saw Muppet Vision, met Phineas and Ferb, went on the Studio Backlot Tour, met Mike and Sully, and then headed toward Disney Jr.-Live on Stage! We had a Fast Pass for that. I’m not sure it was completely necessary to get in, but we were able to set in the middle section in the second “row” (the seating is just on the floor). So, it was nice to be able to get up front. After Disney Jr., we went to Toy Story Midway Mania! That has to be my favorite ride at Hollywood Studios. It is too bad that most other people must feel that way too. The line is always so long and now with the Fast Pass+, we were only able to get one fast pass for Toy Story Midway Mania. Then we went through the line to meet Buzz and Woody. It is nice that there are things to entertain the kids on the way through the line. We ended our day at Voyage of the Little Mermaid. We sat in the front row and had a great view of the production. 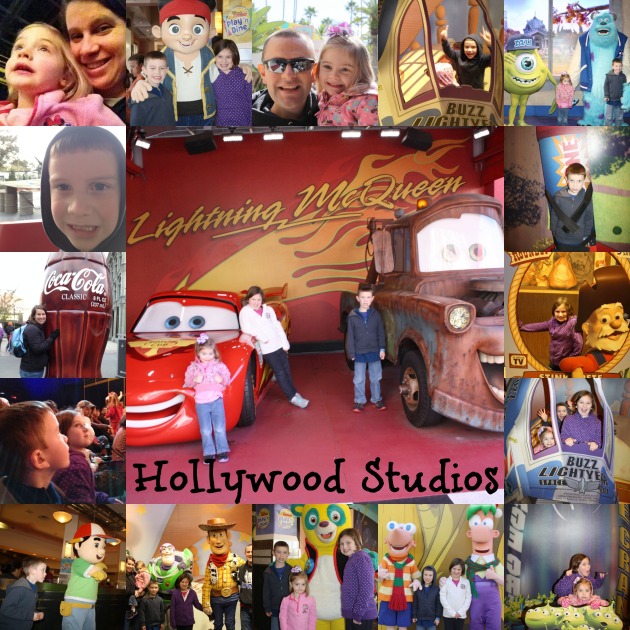 When we got back to the hotel, we ate at the World Premier Food Court. After eating dinner, we headed back to the room and got ready for another day at Disney. That included a trip to the laundry room and getting bags packed for the next day.