Our hotel room was comfortable, fairly quiet, and the beds were comfortable. We started the day with breakfast at the buffet. Abby’s favorite would turn out to be pancake dipped in chocolate sauce (hey…we were on vacation!) and Cade loved the fruit (as usual). Derek usually went for some type of pastry and fruit and I ate French toast every day. We went to the beach and mostly played in the sand as it was a little chilly and windy. Most locals had on pants and a jacket, although it was still warm to us and we were dressed in shorts and T-shirts. When they asked where we were from, they understood a little better, but I still don’t think they really got it. To them, it was cold. We walked down the street to the 7-Eleven to buy some candy and stopped at a street vendor to buy a few souvenirs. After we got back, Cade took a nap and Abby and I went to the beach while Derek stayed with Cade. That is when Abby discovered the snack bars. They had pizza, hamburgers, hot dogs, nachos, and pizza. I know, I already mentioned pizza, but if you knew how much pizza Abby ate while we were there, you would understand why I mentioned it twice! On this day alone, she ate 7 pieces of pizza. In fact, that is how she learned how to count to 10 in Spanish. By the end of the trip, we had lost track, but I estimate about 30 pieces of pizza were consumed by Abby alone. Abby and I ate at the beach snack bar, Marlin Azul and she drank her favorite drink, strawberry daquiri. It came close in number to the pizza! After Cade’s nap, we hung out and ate dinner at the buffet. After dinner we got a taxi and went toward town to a local Christmas festival. They had food booths, clowns with balloons, dancers (not great, high school maybe), Barney, Santa, and Christmas decorations. It was interesting if nothing else. We got a cab back to the hotel and by the time we got to the room, it was time for bed. 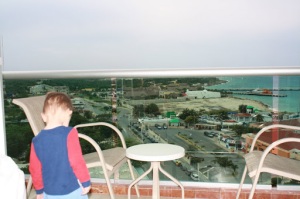 This was the view from our balcony. 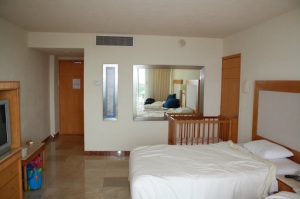 This was our spacious room.

This is the Park Royal’s private beach. 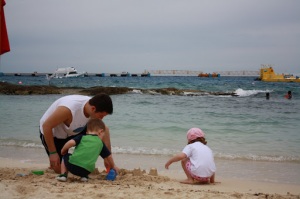 Derek and the kids standing by the hot tub overlooking the ocean. It wasn’t very hot!! 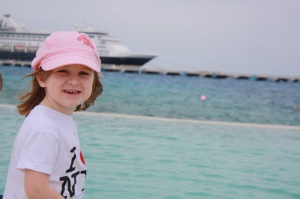 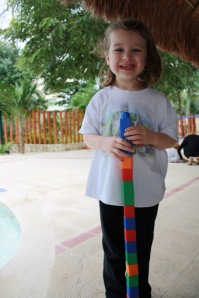 The hotel had a kids’ club where there were toys and puzzles. It was nice for a change of pace. 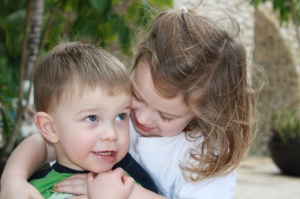 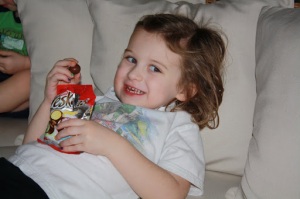 Abby loved the candy we bought at the 7-Eleven. 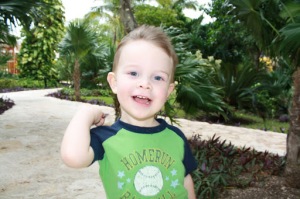 It was a little windy. Look at Cade’s hair! 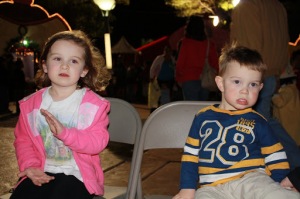 The kids were watching the dancers at the festival. 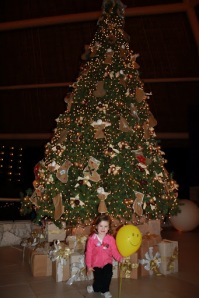 This Christmas tree was in the open air lobby at Park Royal.

After spending the night at Jay and Missy’s, just 20 minutes away from O’Hare, we woke up at 6 and were out the door at 6:20. Jay drove us through the snow and ice and slush and dropped us off. After checking in, we found out our 9:05 flight was delayed and delayed and delayed. The kids loved riding on their Trunkis through the airport. I wish I had pictures of it, but we were too busy pulling. By the time we left O’Hare, we knew it would be a close connection in Atlanta.
We got to Atlanta and had very little time. We made it to the underground tram and headed from Terminal A to Terminal E. When we made it to Terminal B, some stupid woman decided to piddle around in the doorway of the train and jammed it. She then continued to complain about it. Figures. After sitting on the train for 5 minutes, the maintenance man fixed it and we were back on our way. Up an escalator and I told Derek to go and have them hold the plane. I was carrying Cade and Abby was running. When she couldn’t keep up with Derek, she kept yelling, “Daddy! Wait for me!” I told her it was okay and to keep running. She started crying, but being the seasoned traveller that she is, she kept running! As we were running, they were calling our names over the intercom, but Derek got there just in time and we were not too far behind. Whew…that was the last Delta flight of the day from Atlanta to Cozumel. We got on, moved seats around and were on our way…again.
Cozumel airport is kind of crazy for how small it is. They have time share people that attack right when we came through the first door. Some people don’t know what it is for and go with them. I had read travel blogs and just said, “We’re taken care of,” and walked away. We ended up on the Collectivo van since the taxis are all off of airport grounds. We should have walked to the taxi. We sat in the van for a good (or actually bad) 30 minutes. Then the ride to the hotel and we were TIRED! When we saw the hotel, it was all worth it. It was beautiful. Amazing. Wonderful. We checked in to the all inclusive Park Royal resort with no problems, which I had booked through hotels.com for a meer $120 per night. The open air lobby was cool…literally…with the wind blowing in, it felt like we were still in the Windy City. Well, not exactly, it was probably in the high sixties, but quite windy. We had someone bring our luggage to the room and we went and found our spacious room on the top, ninth, floor of tower 1. We had a steam shower, storage space, 2 double beds, and a balcony overlooking the ocean and the cruise ships. We were pleased. After we got our luggage and settled in, it was about time for dinner. We went to the buffet, which opened at 6:30. That is where we ate all of our meals, unless we ate at the snack bars, since the kids couldn’t go to the other 2 restaurants (which we knew ahead of time). We always found great food at the buffet and there was something for everyone. Some nights were better than others, since they were themed, such as Italian, Caribbean, Mexican, Oriental, or Chef’s Night. After dinner we sat by the pool and soaked up the fact that we were officially on vacation. We all feel asleep fast that night. 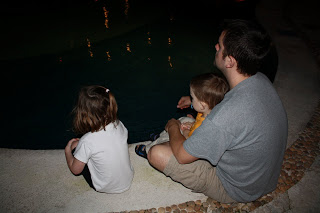