We woke up early at about 7:15 am and left the room by 8:00. We needed to get to get to the ticket office to pick up our tickets that we ordered online for the tours of Hohenschwangau and Neuschwanstein Castles. Derek drove the kids and me there and dropped us off. It was only about a 2 minute drive. Then he drove the car back to the B&B and ran back to meet us 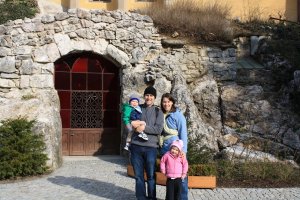 . Yes…we are cheap. We didn’t want to pay for parking. The kids and I picked up the tickets and were just coming out of the building when Derek came walking up. We started our march up quite a hill to get to Schloss Hohenschwangau. It is the castle where King Ludwig II of Bavaria grew up with his parents and his brother. We got to the entrance and had about 20 minutes to spare until our tour started at 8:50am. I sat down to rest and the kids and Derek took a look around. When it was time to go in, I put Cade in the sling (which totally s

aved my arm) and Abby marched up the stairs to the entrance. We had our tour and the castle was pretty impressive. There were only about 10 people in our group, which was nice to be able to move around a little and the tour was all audio. I think a lot of people skip it and just see Neuschwanstein, but I am glad we took the time and energy to see it. After some more photos, we made our way back down the hill and into the town to find the carriage ride up to the top of the mountain (okay, not quite the very top, but it would have been a heck of a trek, especially with the kids.) It was well worth the 12 Euros! We enjoyed the ride up and Abby sang a Backyardigan song to entertain the rest of the people

in the carriage. We’re going to the top of dragon mountain, she sang. We got to the carriage drop off and still had a bit of a hike to the entrance of the castle. After taking a few pictures, we only had to wait about 10 minutes until it was our turn to go in. We were on the tour with a bunch of (I’m guessing) high school students from NYC, I think. One poor g

irl was sick and threw up into a garbage bag in the middle of the tour. We booked it to the front to avoid any germs and tried to steer clear of her for the rest of the tour. We had enough issues without getting any flu germs! Neuschwanstein was built by King Ludwig II and it was only partially completed (11 rooms, I think) before he died at about age 40. Please don’t take any of this information as complete fact. I’

m just working off my memory! Anyway, he only lived in the castle for about 176 days. The rooms that were completed were amazing. We couldn’t take pictures inside the castle. I think that Neuschwanstein Castle (inside and out) is one of the most impressive places I’ve ever been. It ranks up there wi

th the Great Pyramid in Egypt and the Great Wall in China. We bought some souvenirs in the gift shop and started to make our way back to the carriages. On the way down, we stopped at Schlossrestaurant Neuschwanstein for lunch. I had some good schnitzel, which was just like a giant pork tenderloin without the bun. Abby h

ad some more margherita (cheese) pizza and Derek some potato soup. Cade just eats a little bit of what everyone is having. On our way out, we bought some Sneeballen, snowballs, which are donuts with powdered sugar. They sure were good! We rode the carriage back down the mountain, which was only 6 Euros this time and again, worth every cent. Back in town, we did a little souveni 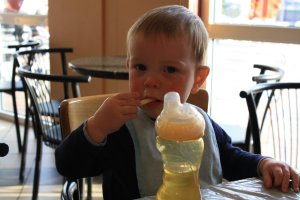 r shopping and then made our way back to the B&B. Abby and Cade slept and Derek and I sat on the balcony. When it was almost time for supper, we decided to go to Austria. We ended up at a McDonald’s, which was only about 10-15 minutes away. I figure someday when Derek or the kids are in Austria and someone asks, “Have you been here (Austria) before?” They will answer yes and then they’ll ask, “What did you do last time yo 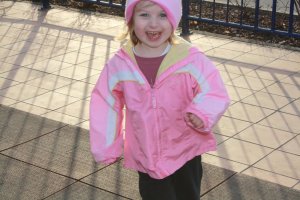 u were here?” It will be kind of funny to say, “We ate at McDonald’s.” hahaha Well, we made it back to the B&B and we were all beat. We sat on the balcony in our pjs for a few minutes and then we all fell asleep. What an amazing day!